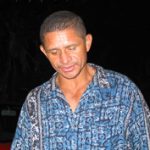 Mestre Espirro Mirim started capoeira in 1979 in Fortaleza, CE by Mestre Everaldo (then grupo Favela later Grupo Zumbi). In 1984 he became Professor. After that he decided to go to Rio de Janeiro, to get more knowledge about capoeira. There he shortly trained with Grupo Palmares (Mestres Gomes and Branco). Within one year he left for Sao Paulo and joined in 1985 the group of Mestre Suassuna (Cordao de Ouro) where he became a professor in 1988 and became a mestre in 1991.

Leave a reply Click here to cancel the reply